I have always enjoyed writing. Throughout my school years, my birthday very often fell on the same day as the final writing exam. I guess not everyone would have been pleased with this pattern but I didn’t mind. I enjoyed it, for the most part, and enjoyed the feeling that came with the end of the school year, the air finally warming up, the upcoming weeks of freedom. I didn’t mind writing assignments for school, and then, once I entered university, I truly enjoyed writing papers and developing my ideas and my grasp on the language – whether it be in english of french. Over the past four years, as I have been working for a neighborhood community organisation, I have appreciated learning how to shape language to reach people of different walks of life.

I had never written on a regular basis on my own terms, but in the past few months, writing has been an amazing outlet to express my conflicted feelings. Through this blog and different forums, I have allowed myself the space to reflect on my life as Paul’s mother, on his life, on what to make of these months of learning how to live without him. I have also been in contact with a few persons I have “met” through their blogs. These few epistolary relationships have been so precious. The level of connection that can form across people who share significant experiences is truly amazing and leads to beautiful conversations.

Earlier tonight, I responded to a message from a friend (what else to call someone I have shared deep feelings and questions with, even though we know little of each other outside our connection as bereaved mothers?). She asked about Paul, how he was, what he looked like. I meant to answer directly to that but without realizing, I found myself writing about his birth. This part of his story, our story, has been on my mind in the last few days as I am having another “conversation” on this question with another friend. I wrote about the birth of Paul and for the first time in days, I was able to truly feel the depth of the bond between him and I. I have written my birth story. Actually, it is one of the only thing I wrote – the beginning of it, at least – while Paul was alive. I have written about the importance of owning it despite everything about it that I dislike, despite the pain associated with the beginning of Paul’s life. But I think this story continues to grow as I change, and as my perspective shifts. So I wish to share it again, in an renewed version.

We had planned on a delivery at a birth center, a beautiful place, close to our neighborhood, that offers actual bedrooms in which to labor, deliver and welcome the baby. I was happy to be able to give birth there, accompanied by midwives we really appreciated, and who cared deeply about respecting my/our wishes for the birth of our child. I was committed to a having a birth as natural and peaceful as possible. I prepared for birth. I imagined what it would be like to welcome our baby into the world, to meet him or her for the first time, to share this intense moment with just P., knowing the midwives would take as little space as possible if everything was alright with the baby.

But things didn’t work as I had planned. After my waters broke, my labor didn’t start as expected. It took a long time to get it started and going, and then after hours of active labor, it stalled. I stopped progressing for hours, despite all my efforts, so I ended up transferring to the hospital to get synthetic oxytocin, and then an epidural, and then more oxytocin. We had hoped the synthetic hormones would help me progress quicker, as my membranes had been broken for a while. The epidural was supposed to help my cervix relax. Nothing worked. No amount of pitocin could get my cervix to open even slightly passed those stubborn 6 cm. I ended up having an emergency c-section after trying for a vaginal birth for about 55 hours. I was so out of it, tired and sad. It was so so far removed from the birth i had dreamt of, and pretty far from my not-so-ideal scenarios as well.

I didn’t meet Paul for almost 4 hours after he was born, even though we were both doing fine. The medical team decided on giving us preventive antibiotics and for that reason, apparently, Paul had to be taken away from me. P. would go back and forth between us, bringing me photos of him, my baby, his skin still red and crumpled. It was such a surreal experience, seeing him, knowing he was my baby but having to wait to hold him while other people were caring for him. Even though I was looking forward to announce his birth, I felt I couldn’t do it before having actually met my baby.

I had just seen Paul for a few seconds when he was born. I just had the time to be surprised to find out he was a boy. At that point, I took this information as just another element that was not as I had expected. And I had not expected that it was to be followed by such a long separation. I didn’t know, and I couldn’t bring myself to pay attention to Paul right away, as I was having such a difficult time dealing with the c-section – the drugs, the unbearable fatigue, the noises, the indescribable feelings in my belly, the coldness of it all. As I realized how long we would be kept apart, laying in the recovery room, cold and thirsty, I worried we wouldn’t be able to bond, that I wouldn’t be able to breastfeed, that he wouldn’t be able to suckle… I regretted not giving him my full attention during the seconds I could. But really, I wasn’t able to. 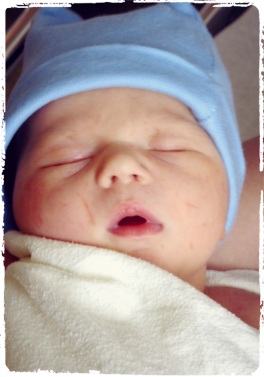 Then, finally, it was time to transfer from the recovery room to a room for the night. We were told someone would bring Paul to us once we were there. We settled in the room and I sent P. to ask how long we would have to wait. I was so anxious. Exhausted and impatient. A few minutes later, he came back to the room, holding Paul — who didn’t have a name at that point — in his arms. He brought him to me, handed him to me.

And then we met. It was so amazing, he was perfect, beautiful. He had little scratches on his cheeks.
A little blue hat from the hospital, and a yellow pajama, with a sleeve rolled up since he had a catheter installed on his hand — just like me. He was so big and so small at once. I was amazed to think he had been in me, part of me, but that he was now a person separated from me. It truly is awesome, I think. growing a human being…

My wonderful son. We did bond. We did learn how to breastfeed. Both of us. I took his pajama off so we could feel each other’s skin. I held him and he started to eat as if he had always done so. We didn’t sleep much that night, we were too busy admiring him. Listening to him. Learning.

I spent such amazing days looking over him. Loving him, feeding him, caring for him.
I want to write more of my memories, of what we did together. But for right now, I just want to embrace how writing is helping me remember so vividly the feelings Paul instilled in me during those hours and days around his birth.

and i wish to share this piece i read today, thanks to a Glow mother : Am I a mother?